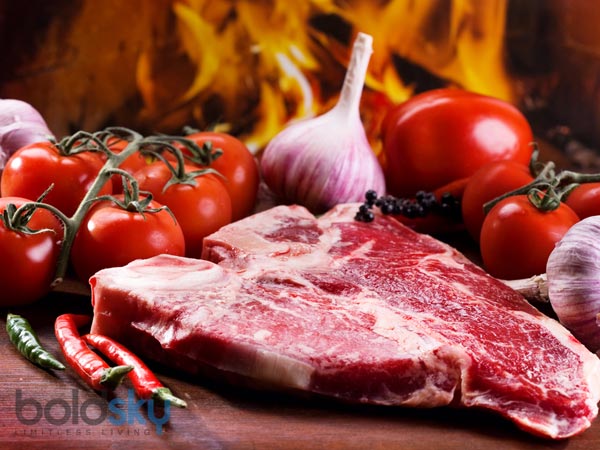 Unprocessed meats, including steak and lamb chops, have been linked to affecting the fertility levels in women, in comparison to bacon and sausages. A new research has suggested that two or more servings of red meat a week, increase the risk of endometriosis in women by 56 per cent.

Endometriosis is a condition when cells in the lining of the uterus are found elsewhere in the body (in the ovaries for example). These cells then begin to react in the same way as the cells in the womb, by building up, shredding, and bleeding.

Endometriosis affects one in ten women of child-bearing age in the UK and US. General symptoms of endometriosis include heavy periods, pain, fatigue, infertility, bowel problems, and bladder problems.

There have been researches in the past indicating red meat could boost estrogen level in women, leading to endometriosis. The results of the study further specify that high consumption of red meat is more likely to cause endometriosis with pain, rather than affecting fertility. However, poultry, fish, and seafood did not show any endometriosis risk in women.

While further studies are necessary to confirm if cutting down on red meat reduces endometriosis symptoms in women, let us find out why women are advised to avoid too much of red meat in their diet.

A major study by the Havard University has revealed that women who ate an excess of red meat were at a significantly higher risk for breast cancer. On the other hand, substituting a daily serving of red meat with a lean protein like chicken, fish, or nuts lowered the breast cancer risk. This is said to be because red meat, when cooked at high temperatures, releases cancer-causing by-products.

Another reason is because the hormones fed to cattle to increase their growth can also raise the hormone levels in women. The processed meats also contain nitrates, which have been linked with increased breast cancer risk.

Eating red meats, particularly, the processed ones, increases the risk of colorectal cancer, especially if you are genetically predisposed. While the gene has a role to play in the immune system, if you have this gene, then eating and digesting meat may trigger an inflammatory or immune response.

According to a study published in the Archives of Internal Medicine, the hormones added to red meat increased breast cancer risk in majority of the women who ate more than 1.5 servings. Their risk of developing hormone-sensitive cancer was double-fold in comparison to women who had fewer servings of red meat a week.

Red meat, being high in unhealthy, saturated fats, has often been associated with weight gain. Although red meat also contains valuable nutrients and protein, when consumed in excess, it can be a major factor for weight gain.

A Harvard study has revealed a link between red meat consumption with high risk of a shortened lifespan. Meanwhile, eating healthier sources of protein such as fish, poultry, nuts, and legumes have been associated with low mortality risk. While the cause for this is unclear, it could be because charring meat increases toxins leading to cancer of the stomach, and other diseases, say experts.

Red meat is a major threat which is likely to make your fall sick with E.coli, the bacteria that can cause abdominal cramps, dehydration, and kidney failure too. Furthermore, a regular diet comprising of red meat can make people more vulnerable to E.coli.

This is because when you eat excess red meat, you tend to absorb a sugar molecule called N-glycolylneuraminic acid (Neu5Gc). The toxin produced by the E.coli targets Neu5Gc and attaches itself to the cells exposed to Neu5GC, for example, the cells of the intestinal lining and the kidneys.

Red meat is high in iron, and when eaten in excess, can increase your risk of developing Alzheimer's disease, says a UCLA study. Excess accumulation of iron in the brain leads to the destruction of a fatty tissue called 'myelin' that coats the nerve fibres. This disrupts the communication of the brain, indicating signs of Alzheimer's.

Most of this risk is due to the presence of high levels of saturated fat in red meat. When a higher amount of saturated fat is consumed, it also increases your cholesterol levels, thereby increasing your risk for heart diseases. Furthermore, red meat contains a compound called L-Carnitine, which leads to plaque formation in your heart, causing heart problems.

Limiting consumption of red meats, particularly, those high in fat and processed ones, and substituting them with other protein sources like poultry or fish can be beneficial. The American Heart Association suggests limiting animal protein consumption to a maximum of six ounces a day and to go for fish, chicken or plant proteins rather than red meat as far as possible.

Consumption of red meat is associated with certain health risks. Therefore, it is best to play it safe and limit your portion size to a maximum of two small servings a week. So, the next time you cook dinner, skip the hamburger and opt for skinless chicken breast or fish.