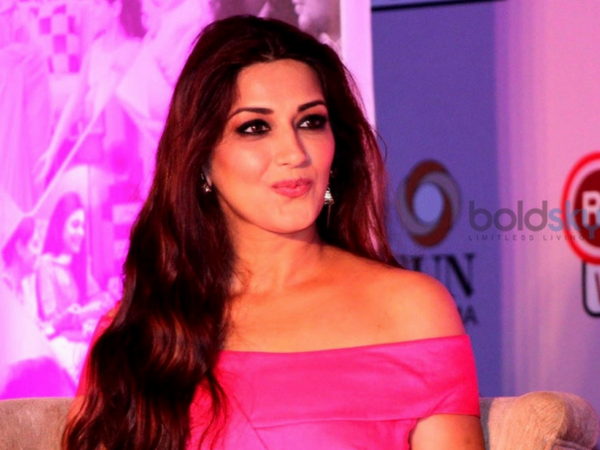 This news might come as a shock to all Sonali Bendre fans, as she just revealed that she has been diagnosed with metastatic cancer. The 43 year old actress revealed about the same in Twitter and Instagram and she is currently undergoing treatment in New York.

Sonali Bendre's post on social media read, "Sometimes when you least expect it, life throws you a curveball.  I have recently been diagnosed with high-grade cancer that has metastasized, which we frankly did not see coming. A niggling pain led to some tests, which led to this unexpected diagnosis. My family and close friends have rallied around me, providing the best support system that anyone can ask for. I am very blessed and thankful for each of them."

She adds on saying, " There is no better way to tackle this than to take swift and immediate action. And so, as advised by my doctors, I am currently undergoing a course of treatment in New York. We remain optimistic and I am determined to fight every step of the way. What has helped has been the immense outpouring of love and support I've received over the past few days, for which I am very grateful. I'm taking this battle head-on, knowing I have the strength of my family and friends behind me."

Soon all the Bollywood actors started pouring in their best wishes.

Let's look in to the details of what is metastatic cancer, its symptoms and treatment.

More so often, a metastatic cancer occurs in stage four. It is a serious stage because the cancer was strong enough to spread to other parts of the body.

As all these cancers are similar in nature, doctors often find it difficult to detect the primary spot of cancer. This kind of diagnosis is known as Unknown Primary Origin or CUP.

It is not always that symptoms of metastatic cancer show up. The nature and frequency of the symptoms will depend on the size and location of metastatic tumours.

However, the common symptoms of metastatic cancer includes the following:

The treatment for this type of cancer totally depends on your type of primary cancer, where has it spread, treatments you have had in the past and your overall health.

If your doctor tells you that your metastatic cancer can no longer be controlled, then you should discuss with your loved ones the end-of-life care. You may also chose to receive the treatment continuously to shrink the growth of cancer and the side effects of treatment.