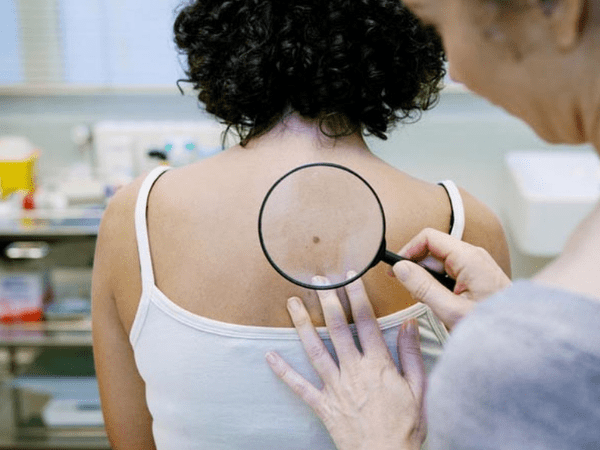 The epidermis i.e., the outer layer of the skin is always exposed to the environment. The skin cells are shedding daily and new ones are multiplying and forming to replace the dead skin cells. Sometimes, these skin cells can multiply excessively creating a skin tumour that may either be benign or malignant.

This type of skin cancer accounts for about 20 per cent of all skin cancer cases. Squamous cell carcinoma affects the squamous cells located at the top part of the epidermis and if left untreated can spread to other parts of the body. It usually appears on sun-exposed areas such as the head, neck, lips, ears and hands and looks like red, scaly rough skin lesions .

They appear as dry, scaly patches which are precancerous growth and can progress to squamous cell carcinoma if left untreated. Actinic keratosis is caused due to the UV rays of the sun .

It is the deadliest form of skin cancer. It develops from the cells that give your skin its colour, known as melanocytes. Melanoma appears as a mole and can occur anywhere on the body. In men, it appears on the face and in women, it occurs on the lower legs .

If you notice sudden moles or skin lesions on the back, legs and other parts of the body, consult a doctor . The doctor will first examine the shape, size, colour and texture of the mole and will ask when it first appeared, how much it has increased over time and whether is it painful or itchy.

Based on the appearance of the mole, the doctor will recommend a biopsy which can be done in many ways:

1. Shave biopsy is done if the basal cell or squamous cell carcinoma is suspected. It involves numbing the skin and shaving a piece of the lesion.

2. Incisional biopsy is done by making an incision in the skin lesion and removing an abnormal part for evaluation.

3. Excisional biopsy is done if melanoma is suspected. The doctor removes the entire abnormal skin part for evaluation.

If the skin cancer is in its advanced stage, the doctor will do a sentinel node biopsy, CT scans, PET scan depending on the location of skin cancer.

The treatment will depend on the type of cancer, size, location, stage and how much it has spread . Then the doctor will recommend one or more of these treatments which include:

According to a study published in Biomed Central in 2009 frankincense oil was known to induce apoptosis of tumour cells . The oil has anticarcinogenic activity that aids in treating skin cancer.

The anticancerous activities of myrrh oil influence apoptosis of cancerous cells according to a study published in the Oncology Letters .

The presence of lauric acid, a medium-chain fatty acid in coconut oil is also beneficial in treating skin cancer by killing the skin cancer cells .

Solasodine glycoside is a natural compound found in eggplant which has been found effective in treating malignant and benign skin tumours , .

Turmeric contains an active compound curcumin which is known for its powerful anticancerous properties. The antiproliferative effects of curcumin are effective in fighting head and neck squamous cell carcinoma .

Note: These home remedies might work when the cancer is in the beginning stage.

Beta carotene is an antioxidant which gets converted into vitamin A after consumption. This nutrient is effective in boosting the immune system and helps in fighting skin cancer . Eat foods rich in beta-carotene such as carrots, sweet potatoes, mangoes and apricots.

Lycopene is a red pigment present in foods like tomatoes, oranges, papaya, guava and watermelon. According to a study conducted at the Ohio State University, daily tomato consumption could cut the risk of skin cancer tumours by half .

Zinc strengthens and helps in proper functioning of the immune system to fight against skin cancer and other diseases. This mineral is known to reduce the risk of squamous cell carcinoma . Zinc is found in foods like chickpeas, lentils, black beans, lamb, shellfish and beef.

Vitamin E is an antioxidant that prevents skin damage from harmful free radicals, acts as a protective shield from the sun and is anti-inflammatory in nature. This vitamin can reduce skin cancer according to a study . Vitamin E is found in foods like nuts and seeds, soybeans, wheat germ, etc.

Polyphenols are micronutrients packed with antioxidants, found in green tea and black tea. These polyphenols contain anti-inflammatory and tumour-inhibiting properties which have been found to repair DNA in UV-exposed skin and also prevents UVB-induced skin cancer .

Vitamin C present in foods like citrus fruits, strawberries, raspberries, broccoli and bell peppers can help in the treatment of basal cell carcinoma .

It is necessary to examine your skin regularly to check if there are any new growths. Detecting skin cancer early will ensure effective treatment.