What To Do If A Snake Bites You? 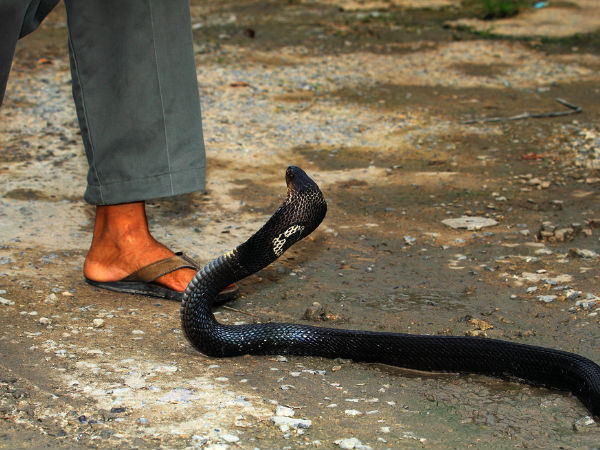 Most of us are scared of snakes or at least at some point in our life would have come across a situation where the thought of a snakebite might have left us with goosebumps. It is, therefore, extremely important to be aware of the types of snakebites (poisonous, non-poisonous) and what you should be doing so that you can arising out of a snakebite episode.

Snakebite is the injury that occurs once a snake bites you. Technically, a snakebite can be categorized as:

When a venomous snake bites but does not release venom, the bite is referred to as a dry bite. By definition dry bite is understood as "venomous snake biting without envenoming". The frequency of dry bites varies among the species of snakes. They are ideally identified with the appearance of tooth marks and fang, but without the presence of injected venom. However, it is good to know that even if a harmless snake bites you, there could still be an infection due to the snakebite becoming infected or an allergic reaction.

When a snake bites and releases venom, the bite is understood as a venomous bite. It begins with a localized pain and then makes the area swell. The symptoms of a venomous bite can worsen if the bite is left untreated. Severe symptoms include nausea, convulsions and paralysis. Snakebite symptoms may also be specific to the species of the particular snake that has made the bite.

Most of us are scared of snakes or at least at some point in our life would have come across a situation where the thought of a snakebite might have left us with goosebumps. It is, therefore, extremely important to be aware of the types of snakebites (poisonous, non-poisonous) and what you should be doing so that you can eliminate any life-threatening hazards arising out of a snakebite episode.

Snakebite is the injury that occurs once a snake bites you. Technically, a snakebite can be categorized as:

Most of the time, it is quite difficult to know if the snakebite is a dry bite or a venomous bite. However, it is always good to treat a snakebite as a venomous bite and seek immediate first aid for it.

The usual symptoms of a venomous bite are:

The victim should be rushed to a hospital. In the meantime, follow the first aid tips mentioned below.

• Restrict the movement of the victim. Ensure that he or she is calm and does not panic much. When the victim panics, the heart rate increases and makes the venom circulate more quickly in the body.
• The bitten area is likely to swell, so remove any items that might get tightened such as rings, bracelets, etc.
• Do not cover the bitten area or the puncture marks. Just clean the region with an antiseptic.
• You would need to stop the lymphatic spreading of the venom. Immobilize the region by bandaging firmly. Use a splint to immobilize the arm or leg area that has been bitten. Try to keep the bitten area (such as if on the hand) at the level of the heart. This prevents the venom from flowing to other major areas of the body.
• Use a compression bandage to cover the entire region along with the splint. The wrapping should be firm and tight. If the bitten region is on the hand - begin wrapping from the digits and go till the armpit. If the bitten region is the leg, then go on wrapping till the groin area.
• Metabolism of the victim should be kept low. Hence, do not allow the victim to eat or drink anything.
• If possible, within the first 5 minutes of the bite, use a suction device to aspirate the venom out of the puncture marks.

If the venom injected after a snakebite is a hemotoxic venom, then the victim is likely to experience a drastic decrease in the blood pressure along with blood clotting. On the other hand, cytotoxic venom is responsible for destroying the human tissue. So, when such tissue dies, it needs to be amputated. Neurotoxic venom is such that it spoils the functionality of the brain and the nervous system.

One of the most commonly heard complications when a pit viper snake bites is that of delayed coagulopathy. The wound can develop an infection and there could be skin loss around the affected region. In some rare cases, snakebites can lead to health complications such as hematologic issues, cardiovascular ailments and pulmonary collapse.

The venom of the snake is a salivary secretion that is used to kill and digest prey. Technically, there are two basic categories of the snake venom. The first kind is the one that affects the nerves (usually the venom of common krait and cobra). The second kind is the one that enters the blood (that of vipers). If someone around you has been bitten by a snake, do not panic, reach out to the nearest hospital to get an anti-venom serum.