Do You Suffer From Magnesium Deficiency? Here Are The Signs 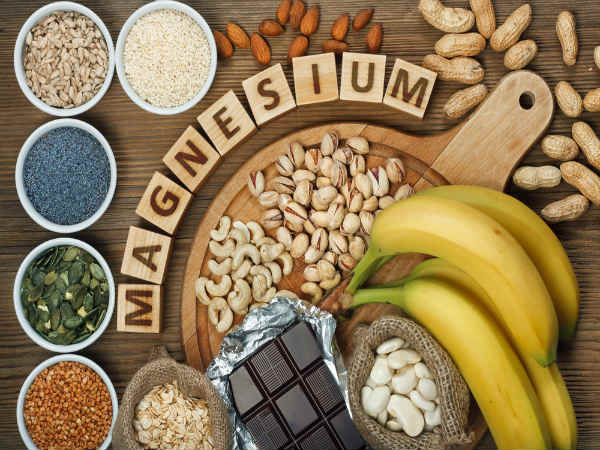 Magnesium is an element which is an essential mineral for biological systems in its ion form, Mg2+.

It is the fourth most abundant mineral in the body and is present in all cells in all living organisms.

It is considered so vital because of the following reasons-

• ATP, Adenosine Triphosphate, which is the energy source for all cells, requires a magnesium ion to bind to in order to be biologically active.
• For the synthesis and stability of DNA and RNA.
• In maintaining the stability of all polyphosphate compounds in the body.
• It is a co-factor of about 250-300 enzyme systems that regulate various biochemical processes of the body.
• It is actively involved in the transportation of calcium and potassium ions through cell membranes which are vital for nerve impulse conduction, heart rhythm, and for muscle contraction.
• Higher magnesium levels in the body correspond to lower diabetic risks.
• For blood sugar regulation, maintaining blood pressure, protein synthesis, and for the structural development of bones.
• It also promotes restful sleep.

Magnesium is also essential for plants. It is the coordinating ion for the chlorophyll molecule. Thus, you see a decrease in the rate of photosynthesis if the plant lacks magnesium. The plant will also show slow stress responses and a decrease of growth rate.

With magnesium being so important, its deficiency causes a lot of problems in living beings. The condition of magnesium deficiency is called hypomagnesemia.

Magnesium deficiency is associated with asthma. Many people who suffer from severe asthma have lesser magnesium in their body compared to the ones who don't.

Researchers believe that this might be because lack of magnesium causes a sort of build-up in the muscles surrounding the lungs. This causes the airway to be constricted, making breathing difficult.

An inhaler with magnesium sulfate is given to individuals to temporarily expand the airway.

Muscle weakness has been directly associated with magnesium deficiency. It occurs when there's a loss of potassium in muscle cells. This weakness is termed as myasthenia.

Fatigue is a condition of physical or mental exhaustion. Every time your body experiences fatigue, it just means that your body needs rest. But if it becomes a persistent condition then we have an issue. And both these have been associated with magnesium deficiency.

Mental disorders like apathy, which is characterized by lack of motion and mental numbness, could be caused by a deficiency of magnesium. If the deficiency worsens, there is a possibility of coma and delirium.

Some patients who suffered from depression and anxiety were seen to have lower levels of magnesium.

The most common symptoms of magnesium deficiency include muscle twitches, tremors, and cramps. This is believed to happen because of an excess flow of calcium into the nerve cells. This leads to them getting overexcited and this hyperstimulates the nerves.

A worsened condition of magnesium deficiency could result in seizures and convulsions.

Irregular heart arrhythmia or irregular heartbeat is one of the more severe symptoms of magnesium deficiency. We know that magnesium is responsible for membrane transfer of potassium and calcium. When there's a lack of magnesium, potassium ion levels are different inside and outside the heart.

Osteoporosis is characterized by weak bones and an increased possibility of bone fractures and broken bones. This could be because of various factors - old age, deficiency of vitamin D and K, lack of exercise, and surprisingly even magnesium deficiency. Magnesium deficiency results in reduction of calcium levels in the blood, which is the main building block of bones.

If you lack vitamin D, you could also be deficient in magnesium. We need to make an effort to eat and drink things that have a good amount of magnesium. Magnesium is abundantly found in plants and in animal products.

The highest and best food course for magnesium would be nuts and seeds. Beans, leafy vegetables, and whole grains have a good amount too. Almonds, popcorn, peanuts, pumpkin seeds, and dark chocolate are rated to have the most magnesium content.

Magnesium deficiency is not only a widespread health issue, it is also one that is never taken very seriously. It could lead to many fatal disorders if not treated properly and on time.

So if you think you might be deficient in this mineral, get yourself checked and start eating the right food that will help you solve the problem.